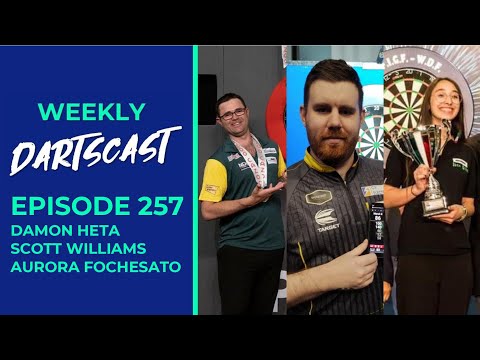 Alex Moss and guest co-host Andrew Sinclair are back with a new episode after the PDC World Cup of Darts.

First, one half of the newly-crowned PDC World Cup champions Damon Heta (15:40) calls in to reflect on a memorable weekend in Frankfurt, winning Australia’s first PDC World Cup, alongside Simon Whitlock.

Next, Scott Williams (47:39) stops by to look back on a breakthrough year so far, winning his first ProTour title out in Germany last week, joining a short list of non tour card holders to win a Players Championship event, the blind 180 while on England duty at the weekend, and his hopes for the rest of 2022.

Then, Italy’s two-time national champion Aurora Fochesato (1:13:01) joins us to chat about her career so far, how she got into darts, her record-breaking run to the JDC World Championship semi-finals last year, meeting her idol Fallon Sherrock at the last PDC Women’s Series, and her aim to be the first female Italian to qualify for the WDF World Championship.

Sponsorship available! Want your business advertised on the show? Email weeklydartscast@gmail.com for more details and a free copy of our new sponsor brochure!

Support us on Patreon from just $2(+VAT): patreon.com/WeeklyDartscast